One Country for All, End the Demonisation 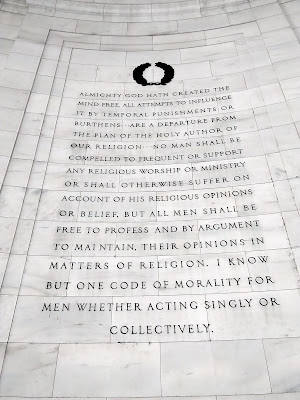 Photo from inside the Thomas Jefferson Memorial in Washington, D.C.

End Occupations, One Country for All

Imagine there is a child in your home which you have decided is not human. You leave it locked in the room all day long. Whenever it wants to go out, it must pass through a security guard, perhaps a relative you pay to keep it confined. Going out or going back into the room, it is a lengthy procedure involving interrogation. The child has no playfriends, and you want to keep it that way, so it constantly feels a state of shame. Any calls are monitored and recorded. Compared to your other children it has no new clothes, no nice education. Everything it gets is hand-me-downs, and the education it receives is of inferior quality. You definitely do not intend for it to go to college.

Your children already know that the system is rigged in their favor if they play the game, abusing-the-unwanted-children. They will get to go to college. In college, they learn more ways of labeling Others as outsiders. More secret handshakes and networking. They become more cruel, more wanton, more ruthless toward the unwanted-siblings. They learn how to hate without feeling any sense of shame, how to agitate and incite others to hate, how to shut down those who tell the truth, how to prevent truth-tellers from being hired anywhere...

All the unwanted children in the neighborhood are now trucked to a fenced-in-site. A camp where they are so desperate, so cognizant of their deprivations, that they will use anything, even rocks, to throw at the guards. They must be desperate, knowing that their best efforts will be met with unequal measures: crushing responses, such as bullets, grenades, bombs, and delivered by drones. You say all the children are bad, affiliated with evil organization, they are using their bodies as merely human shields, so any destruction is justified.

The camp is considered part of your land, but you make sure that it has no infrastructure. Children there die in higher number due to toxic pollutants, limited utilities and poor health. You blame them for not being able to care for themselves, when in fact you forbade any caretaking. You accuse them of being terrorists while never recognizing that this is genocide. The humans inside are dying but you laugh from the thrill, a big grin on your face, because you can see how you are making sure that your loved ones experience Manifest Destiny.

There is a gangstalking website or two out there where highly trained specialists talk about what happens when they buck the system. Call it the "Elijah Effect" or what you will. They claim that they become TIs, meaning "Targeted Individuals." In the age where black-listing and censorship is taking place, why bother with targeting?

Reporters and watchdogs not infrequently want to remain anonymous because of the harassment they endure. The patterns are ingrained within establishment "mind-control" through mass-media propaganda. Take for example the Black Lives Matter and other color movements. As historian Vijay Prashad describes, we are no longer being shown how to connect-the-dots in forming effective social movements because they do not want an effective socialist labor movement. If there were May-Day type movements in America, we would begin to notice the commonalities we share with all laborers around the globe. We would begin to recognize that the only real way forward to fight climate change and depletion of Earth's resources is to believe in Plan C, community-oriented, bottom-up, localized development funded by community banks, and with plenty of rewards-based cooperatives.

Targeted Individuals are frequently those who think or act outside the Black Box. Perhaps their perspective has become too holistic, veering from what is profitable. The Black Box architecture is the product of those who foresee a future where robots, AI technocrats, and aristocrats rule the planet, control all its resources, and farm out humanity for the Brave New World. It's not going to be a cut-and-dry classification of who belongs and who does not. But the current dialectics favor a mindset of autocracy, loyalty to the oligarchy, and blind to all the losers. The losers are taught to blame themselves and everything is portrayed as having failed to achieve success within the system. Screaming for justice, no one has equipped them with the confidence, power, creativity, or even well-roundedness to retool the system, reshape it, craft new tools that truly help liberate everyone trapped inside.

The trapped child sees a society of apartheid, of people who appear to identity with a state religion or philosophy that is reinforced in every thought, word, and deed. Are these truly children of God? We can see universities where the chosen magically float to the top due to name-brand social affiliation. Through networking, they spin illusions around the ignored. Stigma makes it easier to display contempt and openly despise. Whatever decisions the decision-makers make, outsiders cannot question, and that accustoms the chosen to believe in their infallibility. The prime minister must act like a dictator. The president must create rules of exemption for himself. And so on, on down to local news, where changes to the zoning ordinance are dispensed blithely, maybe because the privileged class are salivating over the prospects of revamping blighted neighborhoods.

The reason why one is shaken down before one steps outside into the rest of the house is precisely to instill fear and discouragement of reporting what one sees. Are the Harold Rosenthals correct? Can we see how after so many years of hiring from privileged internship pools, that most of the government agencies, many of the think-tanks, and including the non-profits, Federal City is led by those who believe themselves infallible? Sayanim who deeply understand to who they owe their choice work assignments, higher pay, faster promotion, and superior networking? They are not necessarily manchurian candidates, but are convinced that the system demands conformity, inequality, and hive-mindedness.

It wouldn't be so bad if Shahid or Fatima standing outside didn't see that there are so many others deliberately sent around the maze, obstructed, and silenced because there is not enough to share with them. Like any for-profit system, the maximum profit is created by instituting slavery or as close-to-slave-like conditions as possible. This helps makes knavery, like plagiarism, okay. I personally know a professor who attempted to plagiarize a paper that I wrote; it feels pretty awful when that kind of stuff happens; and yet there are now an amazing number of teachers and academics, as well as graduate students, who either borrow from one another or access the old dissertations stowed away in storage archives.

A system full of cheats and bandits help make for a failed state. And that is what the family is, a failed family, that abuses their unwanted children. That is what a nation is, a failed nation, that cannot understand nor care for all their states, but insteads creates miserable "occupied states"; states which are not even autonomous. All those people are humans and they deserve equal rights and the rights to life, liberty, and the pursuit of happiness. This is what Thomas Jefferson, our Founding Father, wrote. Never mind that there are gangstalkers even at the Jefferson Monument, trying to mind me while I am taking photographs:

"ALMIGHTY GOD HATH CREATED THE MIND FREE. ALL ATTEMPTS TO INFLUENCE IT BY TEMPORAL PUNISHMENTS OR BURTHENS...ARE A DEPARTURE FROM THIS PLAN OF THE HOLY AUTHOR OF OUR RELIGION...NO MAN SHALL BE COMPELLED TO FREQUENT OR SUPPORT ANY RELIGIOUS WORSHIP OR MINISTRY OR SHALL OTHERWISE SUFFER ON ACCOUNT OF HIS RELIGIOUS OPINIONS OR BELIEF. BUT ALL MEN SHALL BE FREE TO PROFESS AND BY ARGUMENT TO MAINTAIN, THEIR OPINONS IN MATTERS OF RELIGION. I KNOW BUT ONE CODE OF MORALITY FOR MEN WHETHER ACTING SINGLY OR COLLECTIVELY." ----Thomas Jefferson, Founding Father of the United States

No wonder the BDS Movement is expanding.  It is seemingly unfair to target the USA and Israel by boycotting, divesting, or sanctions against our economy or what fuels it. But it is much worse for those who are never even be able to participate. Arabs had no voice in refusing to have the Al Jazeera news building bombed, so that perhaps a Kentucky Fried Chicken is built there. Arabs have had no voice in voting, in public review, in appealing, in full citizenship, in equal representation, in establishment journalism, in owning their home, owning their business, naming their street, accessing the mosque, traveling thirty miles from Gaza to the West Bank, having soldiers wrongly imprison you or your loved one because a stone is found in your pocket, etc. The ludicrousness of it all is encapsulated by one American-Zionist neoliberal hardliner, head of a think-tank, who asserts that Palestinians must accept whatever is offered in a two-state solution because they have no rights. Who determined that the citizens of two unjustly occupied states, states in their own rights, have no rights? Who determined that Palestinians who voted for an Islamic party, one justifiably angry yet willing to compromise, are universally all terrorists? Who is deciding that the infrastructure must be bombed to eliminate terrorists who are "hiding" inside hospitals, schools, news buildings, residential apartments, and safe tunnels? Arabs are a pariah to the State of Israel, asserts the Likkud.
The narrative is so faulty, unreasonable, lacking in any sense humanity or brethrenhood that as The Last American Vagabond asserts one must: "Question Everything!"

Consider today what you can do to help the Palestinians trapped in genocidal Israel: 1) Join BDS; 2) Sign a Petition; 3) Call your legislator; 4) Learn more; 5) Share your support!

Screenshots from PalestineCampaign.org
Posted by Hope Sing at 3:44 PM